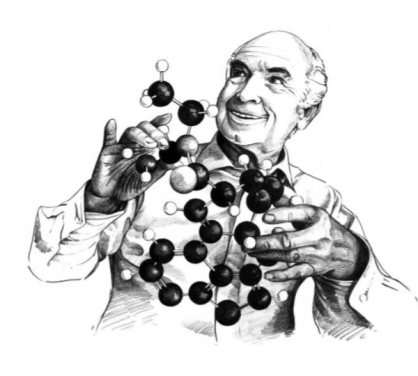 On that date, Chiron was moving especially slowly in the sky. The not-yet-discovered astral harbinger of new consciousness and healing was days away from ‘stationing direct’. That means, from the point of view of Earth, Chiron was hovering, nearly still, as if it were taking a moment of rest from its path around the Sun. The Wounded Healer held a message in his hooves.
But there’s more: Chiron was at the point in the zodiac where the Moon’s orbit would make its upward slice across the path of the sun, as viewed from Earth. This point, the North Node of the Moon, holds the place of our collective destiny, a blinking neon arrow pointing out the most beneficial path forward. That week of LSD’s foray into public life, Chiron pivoted into forward motion from that zodiacal place, 23° Leo. This is within a couple degrees of Albert Hofmann’s own North Node. Synchronicity. The message found its recipient.

Albert rode his bicycle home from the lab, publicly experiencing the world’s first LSD hallucinations. Traveling down a familiar road, he navigated new inner worlds while somehow maintaining balance on his bicycle.
On this eventful day, the scientist was undergoing a few curious astral influences from the Centaurs.

As mentioned, Chiron, leader of the wise Centaurs, was conjunct his natal North Node.
Okyrhoe, Chiron’s oracular daughter, was within a couple degrees of his Chiron.
Pholus, Chiron’s friend who held the corked bottle of the gods’ ambrosia, transited just past his Sun.
Three days before, when Albert touched his face after handling the chemical, thereby setting off the first (accidental) acid trip, Mercury the messenger transited his Okyrhoe, giver of visions.
The unintentional psychedelic explorer reported: “At home I lay down and sank into a not unpleasant intoxicated-like condition, characterized by an extremely stimulated imagination. In a dreamlike state, with eyes closed… I perceived an uninterrupted stream of fantastic pictures, extraordinary shapes with intense, kaleidoscopic play of colors.”
When Hofmann first synthesized the chemical, five years before, Chiron was transiting his own Neptune. The genesis of psychedelia is a perfect realm to witness how this pack of Centaurs activates our higher potentials!
Outer planets Uranus, Neptune, and Pluto were definitely pulling their psychedelic weight, too. The carriers of intuitive sparks (Uranus) and altered-perceptions (Neptune) were supporting his Moon (mental states) with equal aspects of 60° on either side, while Pluto was wrapping up a yearlong process of taking that mind down to its very depths… Like Chiron, Pluto also stationed direct later that week, slowing down with all its psychic weight to a few degrees of his Moon. Here the work of the slow planets point to the deeper architecture of the soul that Earth’s Moon regulates. Pluto-Moon contacts are psychic disruptors; with Chiron also at the Node of the Moon (his, and ours), the higher dimensions of this breakthrough led to universal effects well beyond the personal.
Hofmann was a buttoned-up man of research. Yet following this Pluto/Chiron transit and the discoveries they brought, he went on to research entheogens with indigenous shamans, cooperating in the extraction of the psilocybin mushroom’s active compound.
The Godfather of psychedelia remained serious about the Plutonic dangers of his “problem child”, and did not agree with the indulgences of Tim Leary or the Merry Pranksters. Nonetheless, he was instrumental in generations of psychonauts tuning in & turning on.